Several goose hunters waited in a winter wheat field, scanning the morning skies above a huge spread of goose decoys. All was quiet for many minutes, then in the distance, they heard the first melodic strains of flying geese.

It was hard to pinpoint them at first, but soon they could make out the first long skeins of birds, little snowflakes floating in an orange sunrise. They were coming their way.

Minutes passed like hours. The calls of the snow geese grew in volume. Their forms grew in size. The goose hunters could tell now there were a thousand or more—a hundred here, a hundred there, in long lines and V-shaped wedges. Some flocks flew north, away from their goose decoy spread. But one held a steady course that would soon take it over their heads.

Two goose hunters began goose calling. One waved a white flag fixed atop a long pole. Would it be enough to attract their attention? One goose hunter gripped his shotgun tightly and wondered.

The last five minutes seemed like an hour. Most of the flock broke off, turning toward a large flock of geese feeding in another field. Only two dozen remained, but these were convinced their goose decoy spread was real. At 100 yards out, they cupped their wings and began swinging back and forth in the air as they flexed their rudders and dropped their landing gear.

Too late the birds realized their ruse. As one goose hunter shot, then another, the geese tried to turn and gain altitude. One goose hunter swung on a white bird and fired, then swung again and shot a blue. They hit the ground with hard thumps as he tried unsuccessfully to get another bird in his sights.

When it was over, this goose hunter was shaking. Excitement does that to some hunters. And snow goose hunting is exciting!

The snow goose, Chen caerulescens, is one of the world’s most abundant waterfowl species. Each year, snow geese nest on the Arctic tundra and then travel to southern wintering grounds in very large, high-flying, noisy flocks. The swirling white of a descending flock suggests snowfall, but among the white birds are darker individuals. Until recently, these “blue geese,” as the dark birds are called, were considered a separate species. They are now recognized as merely a dark “morph,” or form, of the snow goose.

Adult snows are medium-sized (weighing 5 to 8 pounds) and have a pinkish bill with a black “grinning patch.” White morphs are white all over except for the black primaries on each wing. Blue morphs have a mostly white head and neck, a dark gray-brown body and black primary and secondary feathers on the wings.

Juvenile white morphs are gray above, white below and darker on the head and neck. The legs, feet and bill are gray, turning pink as the young birds age. Juvenile blues are mostly dark gray-brown with a lighter-colored belly and white under the tail. The wing linings are pale gray, contrasting with the dark body and black primaries in flight.

Biologists recognize three separate snow goose populations. The western population breeds in Alaska and Canada’s Yukon, Northwest and Nunavut territories and winters from Oregon south to Mexico, with concentrations in the central valleys of California. The midcontinent population breeds from Nunavut Territory east to Hudson Bay and winters in the U.S. Midwest south to Louisiana and Texas. The eastern population breeds on islands in the High Arctic, including Ellesmere and Baffin, then winters along the Atlantic Coast from Massachusetts to South Carolina, with concentrations in southeastern Pennsylvania, New Jersey, Delaware, Maryland, Virginia and North Carolina.

In winter, snow geese are highly gregarious and often feed in flocks numbering thousands of individuals. Migrants follow all four major North American flyways. Migration north from wintering areas takes place from February to May. Snow geese depart from the northern breeding areas in September and arrive in wintering habitats in November and December. 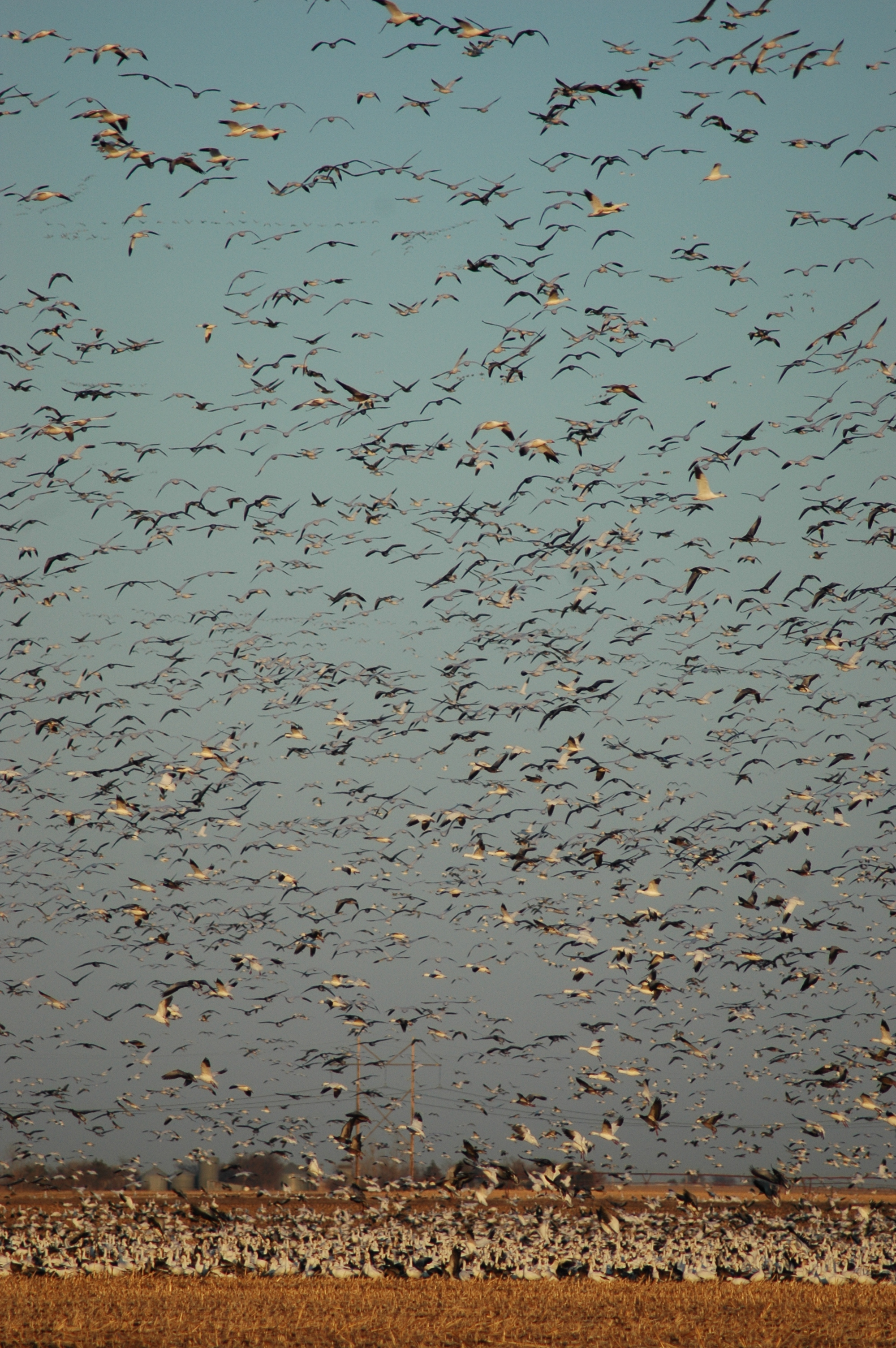 Around 1900, the snow goose population had ebbed to only 2,000 to 3,000 birds. But during the 20th century and into the 21st, the population burgeoned as snow geese took advantage of increased food supplies along migration routes and in wintering areas. In some areas, populations have increased as much as nine percent annually. Biologists estimate there are now 5 million to 6 million snow geese in North America, a population that may be too large to be environmentally sustainable.

Since 1998, goose hunters have harvested 1 to 1.5 million snow geese annually. Recent conservation hunts implemented in the U.S. and Canada have been successful in doubling harvest rates and reducing the population. When snow goose numbers are too large, the birds’ feeding can destroy their own habitat, which is also used by other species. Hunting provides the best means for keeping goose numbers in check.

Although they are big birds, snow geese have a relatively small kill zone. The total area in which pellets will kill a goose is just one-tenth the bird’s total size. To ensure your shots hit the vital zone with enough power, you need to pattern your guns and determine the correct loads.

Most goose hunters opt to use a 10-gauge or magnum 12-gauge with size BB, BBB or T shot. Nontoxic shot is mandatory everywhere. Because steel shot has a tighter pattern than lead does, the best chokes when using steel are modified and improved modified. However, each choke is unique, which is why goose hunters should pattern their guns before the season

Snow goose decoys come in several styles: full-body, shell, floating, rags, silhouettes, magnums and specialty items such as goose flags and motion decoys. Ideally, the goose hunter should use some variety in the goose decoy spread and use goose decoys most suitable for the area being hunted. When goose hunting a big farm field, for example, you’ll probably want lots of inexpensive rag decoys with some full-bodied dekes mixed in and a flag to draw the birds’ attention. When goose hunting a river where geese go to rest at night, floating decoys will be wanted, along with a few standing decoys to place along the banks.

The number of goose decoys used depends largely on the goose hunter’s budget and the type area being hunted. But when goose hunting snows, one must never forget that bigger goose decoy spreads almost always are better. If possible, set out a few hundred at least, or better yet, a thousand or more

Remember these things regardless of the type or number of goose decoys used:

Except during late conservation seasons when electronic goose callers often are allowed, if you want to become a good goose hunter, you must become a good caller. This isn’t something you can learn the weekend prior to goose season. Start early and practice.

Dozens of good goose calls are available, all of which are effective in the hands of a good caller. It’s helpful to listen to wild birds and try to imitate them with your calls. There are no better teachers. But unless you have a friend who is a skilled caller who can teach you, you also should purchase an instructional CD, DVD or audiotape that will allow you to hear the actual sounds of geese and good calling by practiced goose hunters. Study this and try to duplicate the sounds used for various situations. After some practice, record yourself on a tape recorder and decide for yourself if you’re good enough to start calling in the field. Listen for weaknesses in your repertoire, then practice to improve them.

There’s no such thing as a casual snow goose hunt, one reason many waterfowlers don’t participate. This sport requires large goose decoy spreads and constant scouting.

First, you must study movement patterns of geese where you want to goose hunt, then secure permission to hunt where concentrations are located. (Most hunting is on private hunting lands.) When geese start using a field, they stay until the food supply is exhausted. Being there after they’ve started using the field and before they’ve eaten it out is the trick.

Elaborate ground blinds are nice but not necessary because a goose field usually produces only one or two good shoots before geese move elsewhere. Many goose hunters simply lie on their backs in the goose decoys and wear white or camouflage-pattern clothing. Pit ground blinds, portable ground blinds and makeshift ground blinds made from natural materials on-site also can be used, depending on where you hunt.

When it comes to snow goose decoy spreads, bigger usually is better. The decoys should be in place before sunrise to take advantage of the snow goose’s propensity for flying early.

The most important thing goose hunters should remember is to remain well hidden and motionless until birds are well within shooting range. Snow geese are wary, and if they see or hear anything out of place, they’ll avoid it. If approaching birds seem reluctant to land, flare off at the last minute or land consistently outside the decoys, chances are they are spotting the blind, hunter movement or something else that makes them nervous. Adjust as necessary.

Avoid the temptation to shoot when the first geese start dropping into your set-up. Veteran waterfowlers hold off until the lead geese are touching down and geese in the rear of the flock are well within gun range before making their move.

Remember this rule of thumb as well: If, when aiming, the end of your gun barrel covers more than half the bird, the goose is beyond 45 yards and is too far away for a clean kill.

If you’re not up to the tasks just outlined, consider hiring a hunting guide. These guys can show you the ins and outs of snow goose hunting, and after you’ve experienced a hunt first-hand, you’ll know whether you really want to make the required investment in time and hunting equipment to hunt on your own. Best of all, hunting guides do all the work. The hunter need not spend hours scouting, gaining hunting permission, and setting and retrieving goose decoys. For a reasonable fee, reputable hunting guides do all this and clean and pack your birds, too.

Snow goose hunting is challenging, for sure. Nevertheless, it’s a sport many of us find irresistibly attractive. Goose hunting allows us to perfect our skills with a shotgun and to go afield with men we enjoy and admire. Most of all, it gives us another excuse to be outdoors. Until you have sat in a goose spread and watched a fall or winter day unfold, develop and decline, you have missed one of life’s greatest pleasures.