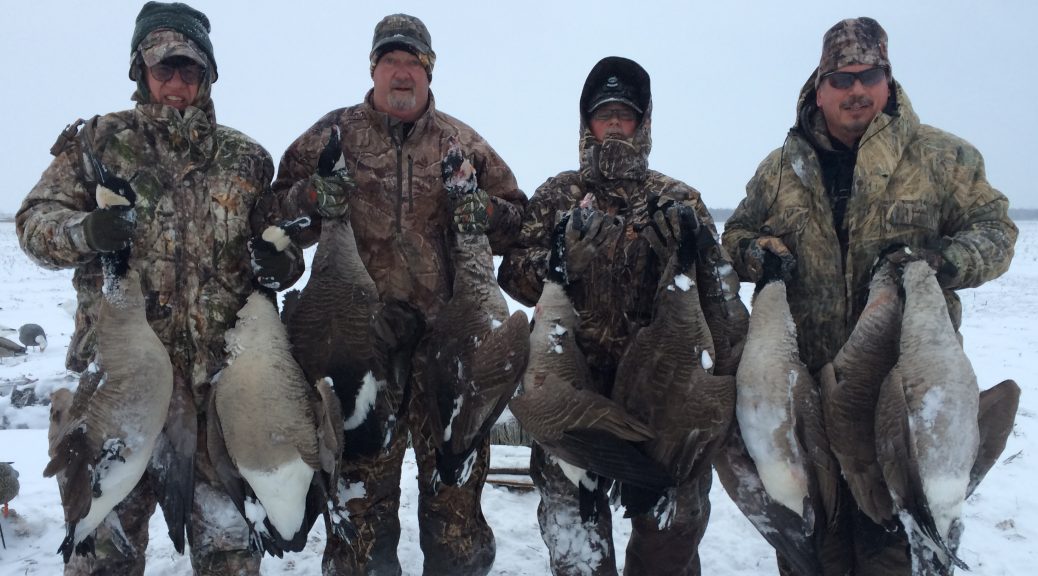 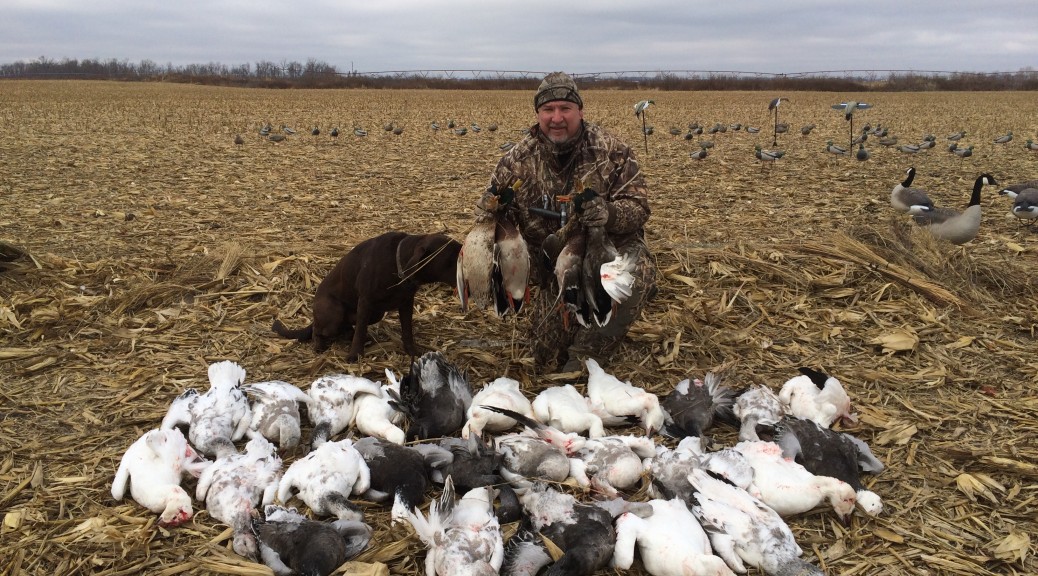 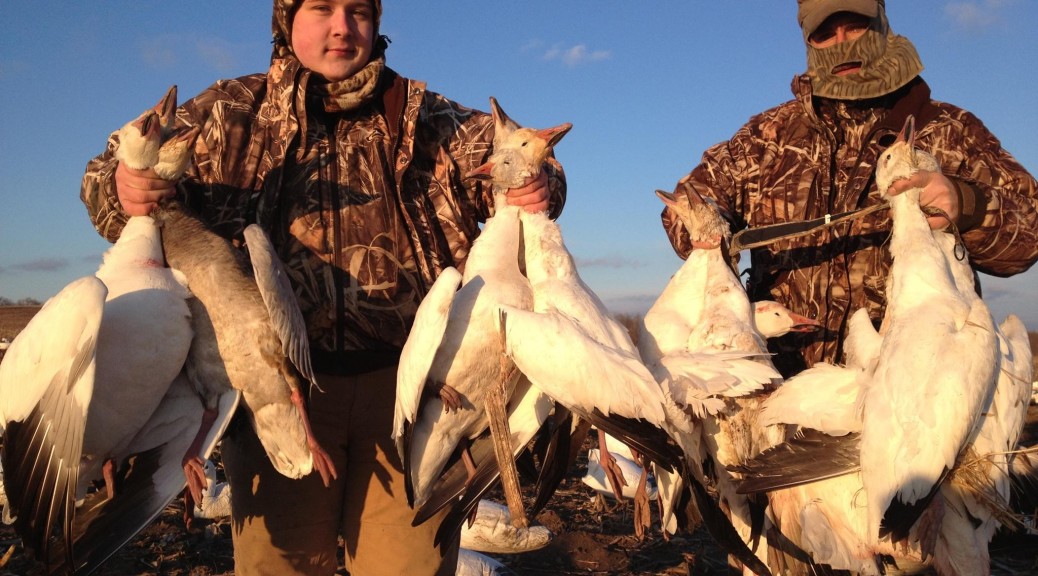 Call NOW before we are booked!

Top 5 reasons to book your hunt with us this season!

2. We have 10 years of Spring Snow Goose hunting experience and we live here. We know where the geese are and we will do our absolute best to put you on them.

3. We hunt all day and are in the most predominant flyway in the United States.

5. We want you to have the best hunting experience as possible. Your success is our business!

The Missouri Conservation Action Season opens February 1 We have some openings for the beginning of the season.

Full Day hunts $175.00 per hunter / per day.  Over 1 Million snow geese at Squaw Creek NWR The snow geese already in Missouri and the hunting should be fast and furious.

The Muck Boy crew will be in Mound City, Missouri the weekend of March 2nd, for our 2nd spring snow goose hunt. As all waterfowlers know this hunt will be subject to the birds migration. You can only be in the path of

this spring migration, the rest is up to the birds. With this winter being more like a normal winter, we are hoping our timing will be a little better than last year, when we arrived a little late. As like last year we will be hunting with Snow Goose Chasers. We had such a great experience with Scott our outfitter, George the field boss (guide) and JP, George’s trusted assistant, choosing them again to guide our hunt was a no brainier.

2/6/13 – Geese are starting to move. Up until about Wednesday most reports had the geese in the south of Missouri but the picture on the left was taken near Vandalia IL. and JP one of guides for this trip reported just seeing the first geese around the Mound City Area.

2/14/13 –Let the hunting begin – more and more geese are arriving everyday into the Mound City area. Today one of the crew members had a nice hunt prior to our trip in 12 days, with Snow Goose Chasers– (Note: Scott has a few openings left if you think you ay want to try a hunt like this – just give him a call.

2/23/13 – Snow, Snow and now more Snow on the way – If this isn’t bad enough, most of the geese that had arrived have moved back to southern Missouri and Arkansas. Our Outfitter Scott has asked us to reschedule to the weekend of March 15th and 16th. If your planning a trip next week or weekend first check with your outfitter.

3/18/13 – The hunt is over and we have our complete report posted by the end of the week. Make sure to check back.

The Hunt – 3/ 15/13 Friday –We arrived at the Kwik Stop in downtown Mound City at 6am where we met up with out outfitter Scott of Snow Goose Chasers and Guide George for today’s hunt. We had four other hunters along today, a father and son team from Indiana, alocal Grandfather and Grandson and George’s trusted companion J.P. The morning started slow with a lot of Canadian Geese and a few flocks of Snow Geese around but nothing was

worked the spread. Around 9am a six pack came from the north and headed straight to us losing altitude the whole time. They circled once and came directly overhead about 60 yards. It was a difficult shot out the back of  the lay out blinds and unfortunately only one bird fell. By this time the temperature had reached the mid 60’s and there was hardly a wisp of wind or a bird in the sky. This gave us a chance to get out of the blinds and stretch our legs and check the blinds and decoys. Just before our lunch break a snow dropped in but only came to within 50 yards and looked to be hooking off so George yelled “take’em” and this poor bird ran into a wall of steel shot.

After getting lunch we ran over to the Squaw Creek Wildlife Refuge to see how many Snow Geese were there and the latest count by the refuge staff was at 615,000 birds. It looked like every one of them was there at lunch, it is quite a sight to see that many birds in one place at one time. We all showed back up to the spread at 2pm and stayed until end of shooting time. Temperatures by this time were in the high 70’s to low 80’s but the wind had shifted to the northwest. We turned the blinds and made sure they were camo’ed up good for the afternoon hunt. There was a little more action with the group taking five more singles. The temperatures by the end of the hunt had started to drop and the winds were already due north. Everyone was excited about the prospects for the morning. With over 600,000 birds less than 5 miles away, a strong North wind and the temp’s in the 40’s we thought we were going to be in for a special hunt.

3/ 16/13 Saturday – We arrived back at the field around 6:30am with temperatures around the 40 degree mark and a stiff NNE wind at 20 to 25 mph. We took two large adult snow geese early and watched bunch after bunch of ducks buzz the spread. About 9am a couple of us had to go back to the truck and get our winter bibs and coats because the temperature had dropped to the very low 30’s and the wind had not let up. With nothing much flying, around 11am the group from Indiana headed home. This gave us a chance to catch an early lunch and head to the refuge to check the bird numbers. To our surprise they were all gone, from 600,000 to around 1000 birds overnight. Mother Nature never ceases to amaze. Knowing there were not many birds in the area we still went back to the field and hunted till about 5pm. As expected, we seen very few snows that afternoon but still enjoyed the comradery  of the hunt and the efforts of George.

We are still figuring out Snow Goose hunting and have adjusted our plans again for next year. Our schedules limit our flexibility but we know that Snow Goose Guides will always do everything that they can to make               sure that we have the best chance for success on the weekend we are there. We look forward to the 2014 migration and have our fingers crossed for better luck, because you can count on us buying our tickets for the Snow Goose Lottery again.

The Missouri Conservation Action Season opens February 1, 2012 We have some openings for the beginning of the season.

All hunts Feb. 1 – 15th will be $150.00 there are snow geese already in Missouri and the hunting should be fast and furious.

Well you would have thought that the cold front would have motivated the snows at Grand Pass and Squaw Creek to move somewhere warmer but I am here tell you all it did was move them around they are still right where they were in Missouri. Season Opens February 1, 2012

Snow geese are fast learners and quickly become wary when hunted. They are long-lived and travel in large flocks, so thousands of experienced eyes examine every potential feeding and resting place for danger before landing. Furthermore, their nomadic lifestyle makes them difficult to locate.
Hunting snow geese requires hard work and specialized strategies, but those who learn the tricks find it immensely rewarding.  Several hunters claim that few outdoor experiences can compare with being at the center of a swirling-vortex of several thousand squawking snow geese settling into a decoy spread.
Follow these quick tips to improve your odds on your next trip.